Yes. Yes I am. “Doesn’t that mean your memory will be dulled with the passage of time and won’t fully reflect your thoughts on these travels?”

Yes it does. Luckily I have the ability to look at my Google Timeline to try to figure out what happened on each day and piece together the experience.

The full album of pictures from this city can be found on my Flickr.

After much angst, packing, repacking, and deliberation over every piece of clothing I packed, I shoved a bunch of extra crap in my bag at the last minute and headed off to the airport. Most of the flight was spent trying to get some wholesomely useless sleep between watching Beauty and the Beast.

Quick connection through Amsterdam, and we were in Hamburg and on the way to the city center on one of the wonderful German Trains. It’s been said that Hamburg is really known for its thriving port, which really excites Germans and people who have never seen ports before. Living in Seattle, we’re exposed to ports basically every day and the luster is somewhat dulled. It’s a city that’s in the middle of a generally well-regarded redevelopment effort: old warehouses are being converted into trendy mixed-use housing and a shiny new philharmonic hall has recently been completed.

The only real objective the first day on the ground after a transoceanic flight is to stay awake until 8pm, no matter what. If you don’t stay awake until 8, jet lag will spoil the next week of your trip. YOU MUST STAY AWAKE.

So we went to the port.

Hamburg is certainly set up to have tourists visit the port. There are plenty of businesses and tours that help capture the port essence that some of us crave. Water taxis ply around the harbor shuttling people too and fro. We grabbed one of them.

Hamburg being a moderately large German city, it has a U-Bahn. I had no choice but to ride it whenever possible in order to perform research on how efficient and extensive it is compared to basically every city in America.

Our energy levels were running low and it was barely the afternoon. If there’s one thing gentrifying German hipsters like, it’s coffee. Hitting up a coffeehouse and roster in a former warehouse, we bumbled our way through ordering multiple shots of the strongest coffee they had. This provided around 4 minutes of energy per shot before settling down into the doldrums of jetlag. It was not great.

Nestled upstairs in another warehouse, a uniquely German attraction came before us: Miniatur Wunderland. This is nominally billed as a model railway project that went somewhat overboard. They went a LOT overboard in all of the good ways. Spanning two large floors, this project contained multiple zones that each had hundreds of trains, vehicles, and people. Day/night cycles? Got it. Airport that has planes taking off and landing? CHECK. Floating cargo ships? You bet.

Even as we were basically sleepwalking through this magical place, it was astounding to see all of the time and effort the team who maintained this railroad put in over the past twenty years.

Hidden everywhere are small little stories that play out. People move about. Businesses are ran, parades suddenly start, and occasionally there will be huge miniature fire responses. What’s remarkable is that all of the vehicles aren’t on tracks: they’re conveyed by magnets underneath the floor and a computer system will dispatch them live through the system when their story plays out.

Let’s take the above image as an example. At a particular time, the computer system will page all of the vehicles above to come to this building which suddenly is on fire. Where ever these trucks may be, they will reroute to this fire and dynamically steer around all of the normal “civilian” traffic on the roads. Once they’re done, they’ll all go back to their fire stations, or maybe get peeled off to go to some other smaller event. It was really quite astounding and probably way cooler if I wasn’t asleep.

Next stop? Berlin! This city had been on my list for a very long time and after  another wonderful train ride, we arrived in the thriving capital of Germany.

Our AirBnB was a flat near the upper floors of the above building. Built during the time of the DDR (East Germany), it was intended to house families of high-ranking party members. Featuring such cool amenities such as “bare concrete walls” and “elevators that only stopped every other floor,” it was essentially purpose-built to house me.

Adorning the one of the walls was a photograph of a variety of hopeful looking East German women at a mass game. I’d like to think that the faces of each reflect a different component of the East German experience during the 1980s.

To save costs, the elevators only stopped at every other floor. 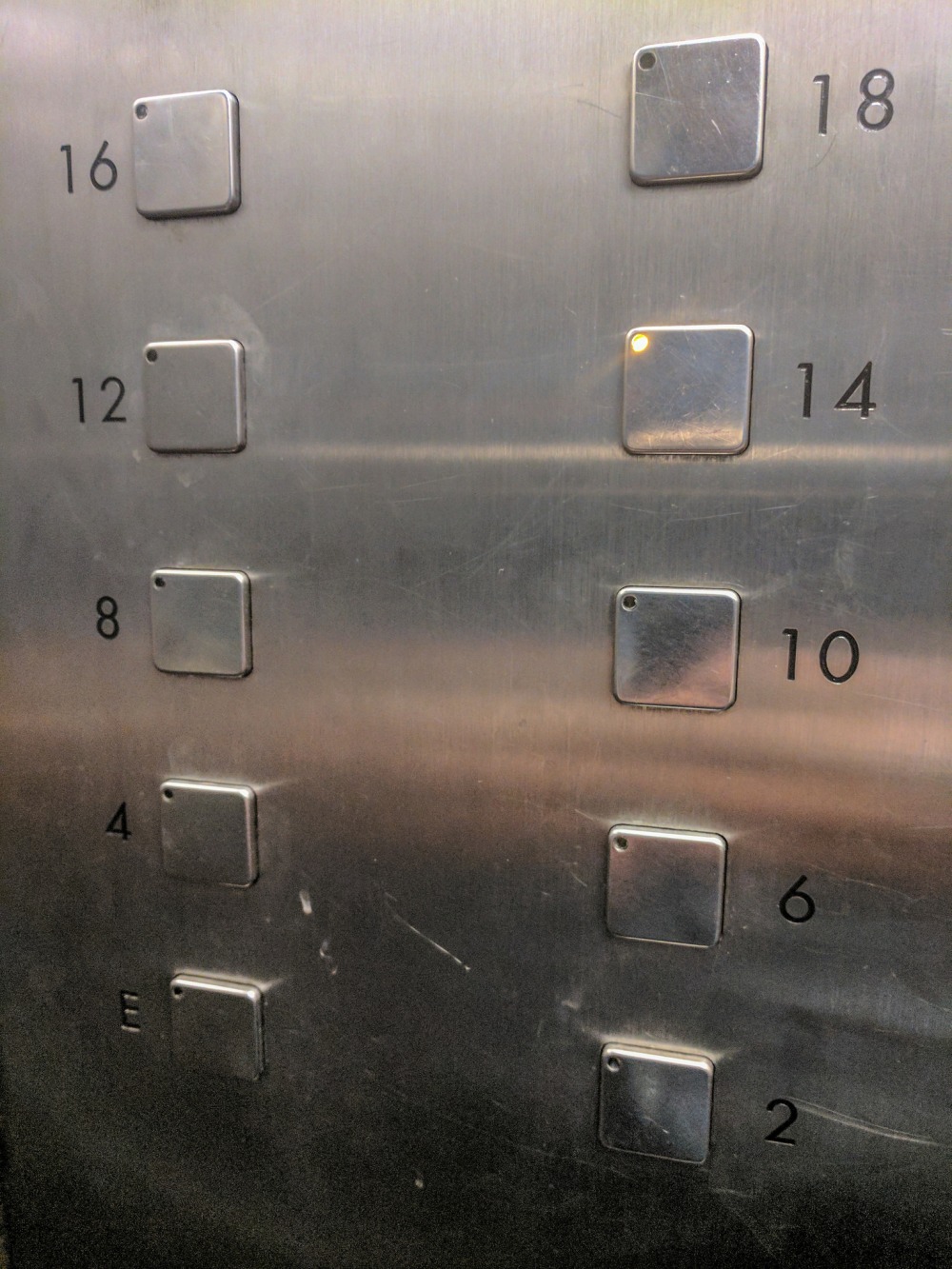 My birthday was being started in style with a tour of the Reichstag. Rebuilt after the reunification, this symbol of modern Germany was the perfect start of a day that would be filled with World War II and Cold War history.

The Brandenburg gate is one of those monuments that you don’t fully know what it looks like, but the minute you see it you just know what it is and what it signifies. 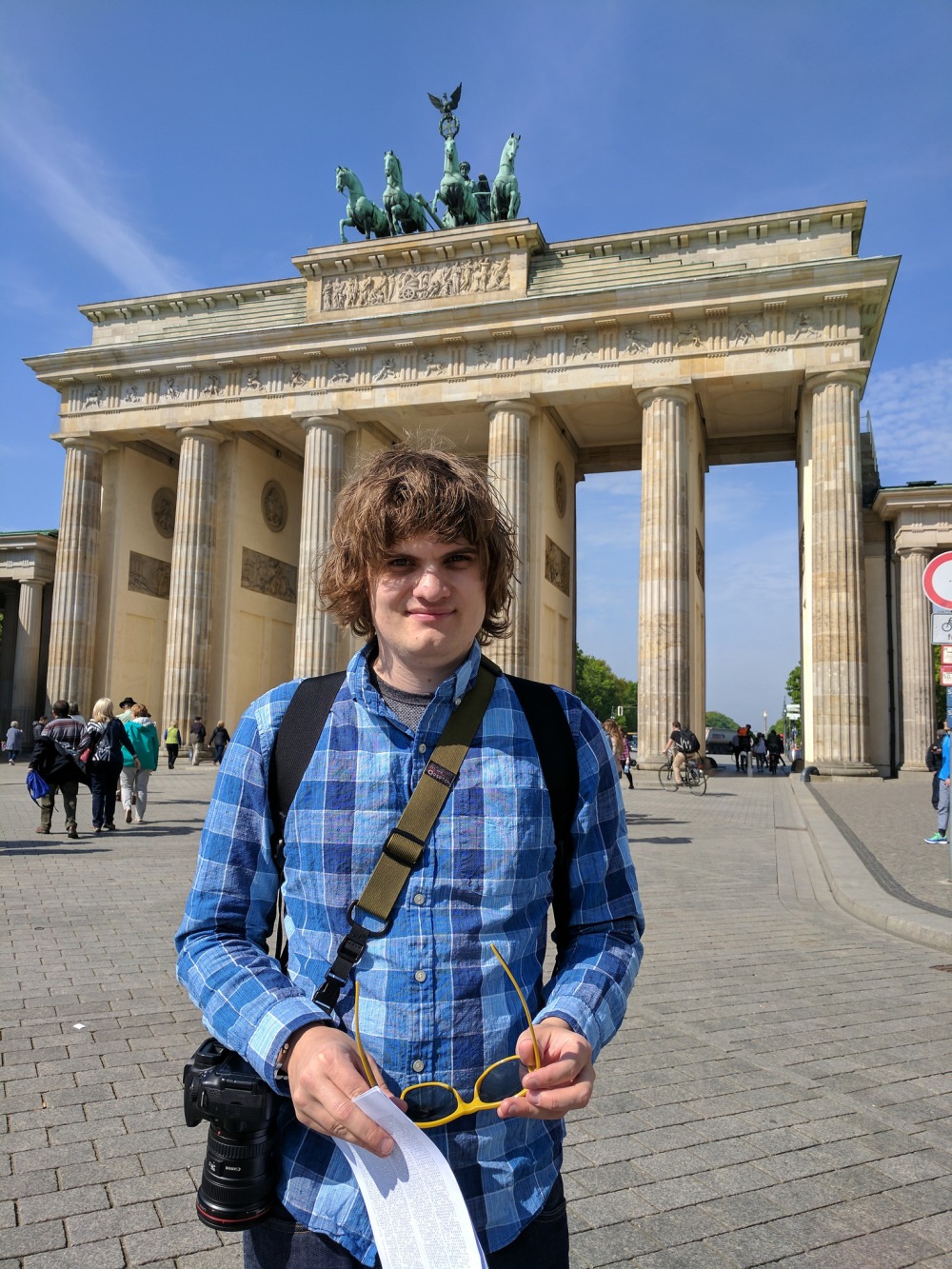 Tracing the way through Berlin, frequent consultation of the walking tours was required. 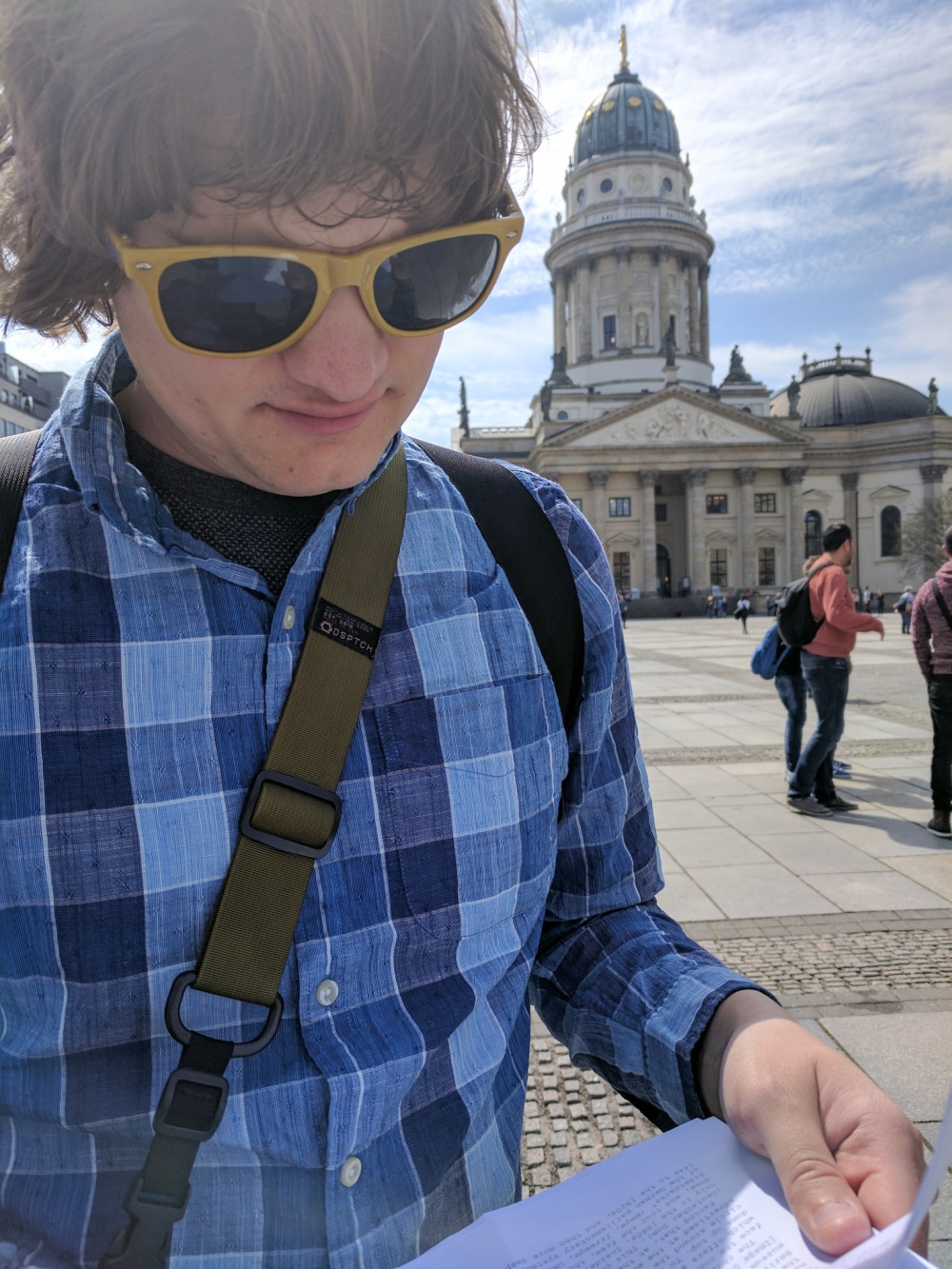 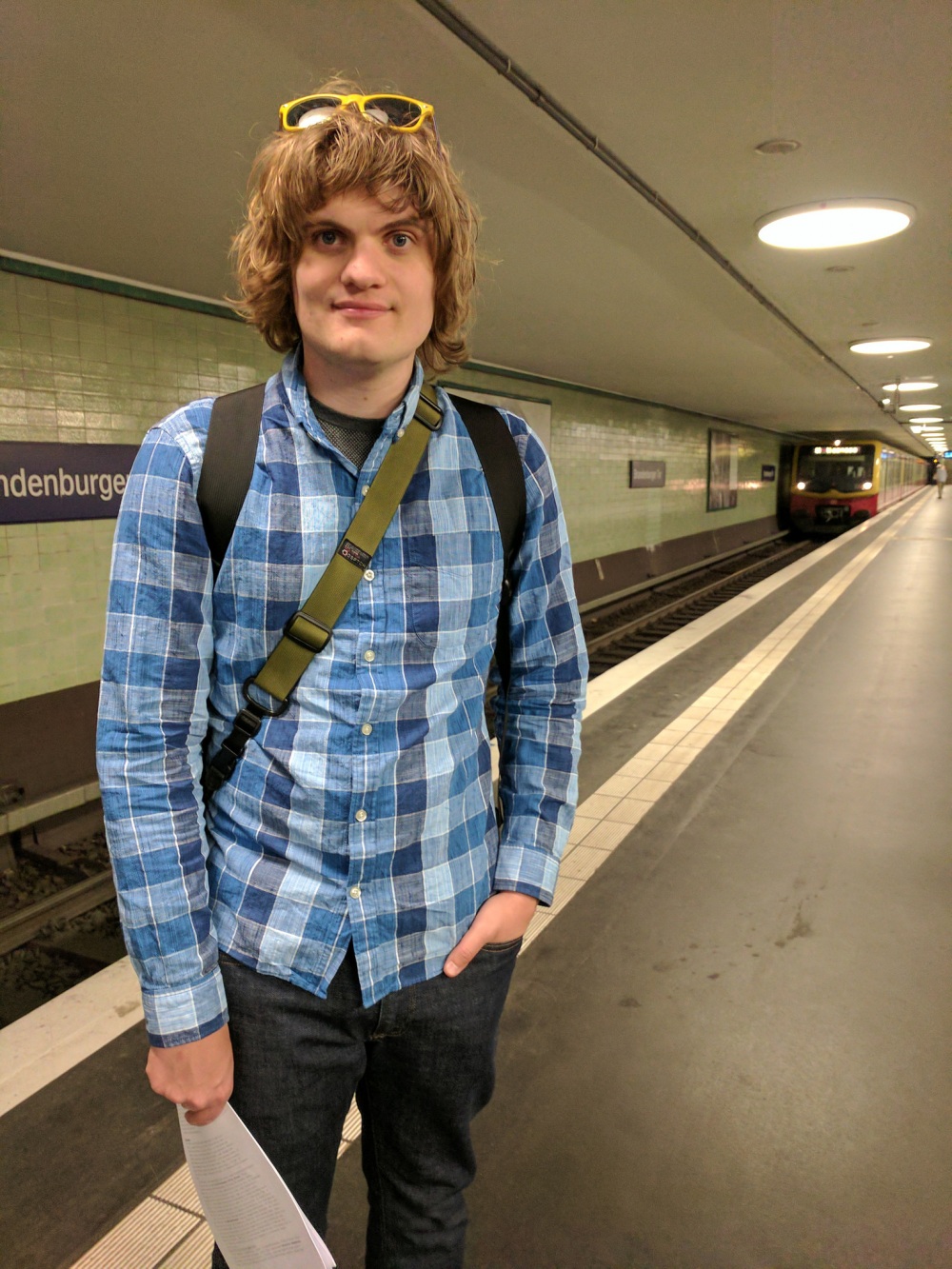 When in Berlin, it’s time to eat currywurst! Finding a stand near Checkpoint Charlie (itself a commercial hellhole with no historic value left), much munching of vegan currywurst and fries was had. Behind me is the former Ministry of Aviation building, one of the few remaining public buildings that survived the bombings in the waning days of World War II. Note the general fascist architectural design.

It’s not to say that some members of the public don’t entirely miss East Germany.  There’s a certain nostalgia for some parts of life in the DDR. The pragmatic Germans refer to this as Ostalgie (basically east nostalgia). Visiting the DDR museum, the exhibits portrayed life as it would have been for citizens of those behind the Iron Curtain.

This is me in a Trabant. A small car that is made (somewhat) of cardboard, it got you to where you were going. Usually.

You can also make like you’re a stern bureaucrat ready to dole out paperwork at an impressively slow pace. Hello comrades.

Saturday started out with a rainy trip to the laundromat. Our next destination was Scandinavia, and as this is largely a laundry desert it was important to top off on fresh clothing. The rest of the morning was spent visiting the Topography of Terror, a museum based on a former Gestapo building that chronicled the rise and fall of the Third Reich.

Memories of East Germany and the Berlin Wall are fading with our generation. We never knew a world where Germany was divided, and the city is rushing to preserve relics of a past that may quickly be bulldozed over. Seeing part of the wall: another historic sight that is instantly recognizable, was certainly a somber experience.

A poignant memorial exists in one of the parks surrounding a piece of extant wall that commemorates all of the men and women who were killed at the hands of the East German border guards. 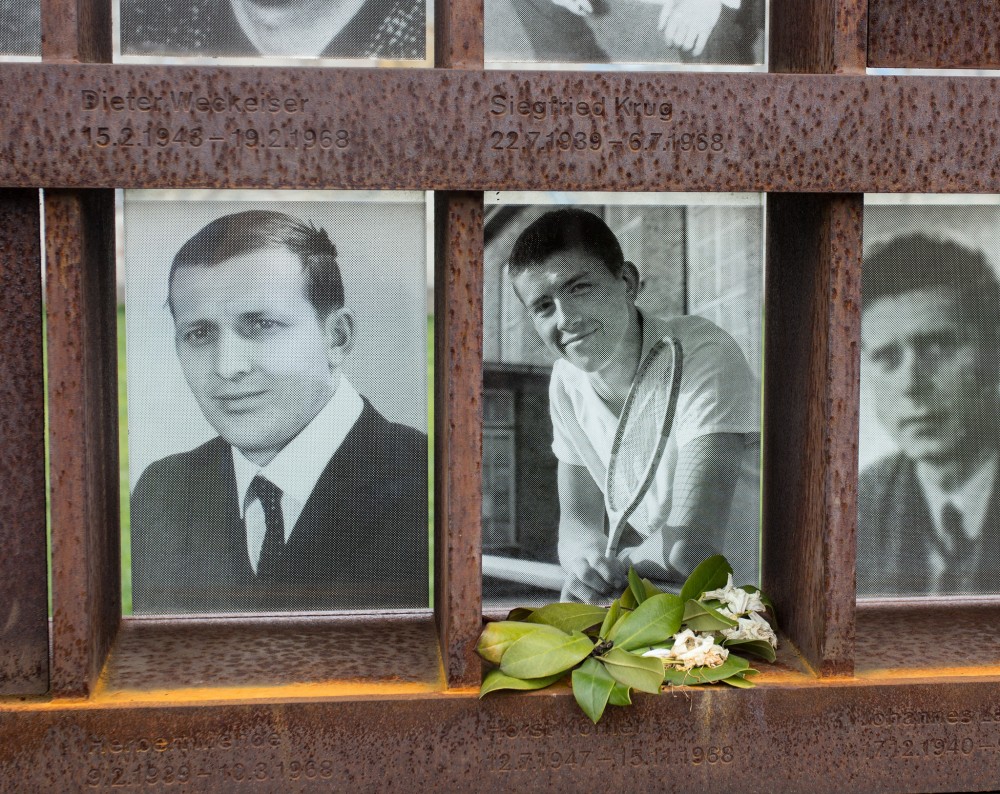 With Berlin behind us, it was time for one last trip to the aging Tegel Airport. In theory, this airport should have been replaced quite a few years ago by the mostly complete Brandenburg Airport, but in a strange happenstance for this country, the project is mired in construction delays, shoddy workmanship, and is perpetually “a month away from opening.”

So we were flying out of Tegel on AirBerlin, which was a failing airline that finally went out of business in late 2017. Their “terminal” building was a large warehouse, and the flight was (naturally) delayed.

Soon enough AirBerlin finally decided our flight could take off, and it was off to Stockholm!