A few summers ago I was trawling through the bedroom where I grew up and trying to clear out and recycle a lot of the magazines, brochures, and pamphlets that I had collected while growing up. Not to dwell on the subject, but I collected a lot of completely worthless pamphlets. Let’s take a look at some of the more interesting items that I found!

The December 1988 National Geographic cover is certainly an eye-catching one: a hologram spans the entire cover from back-to-front. The Earth spins as the cover is tilted, and the title, “Can Man Save this Fragile Earth?” makes a plea to the problems facing our world. 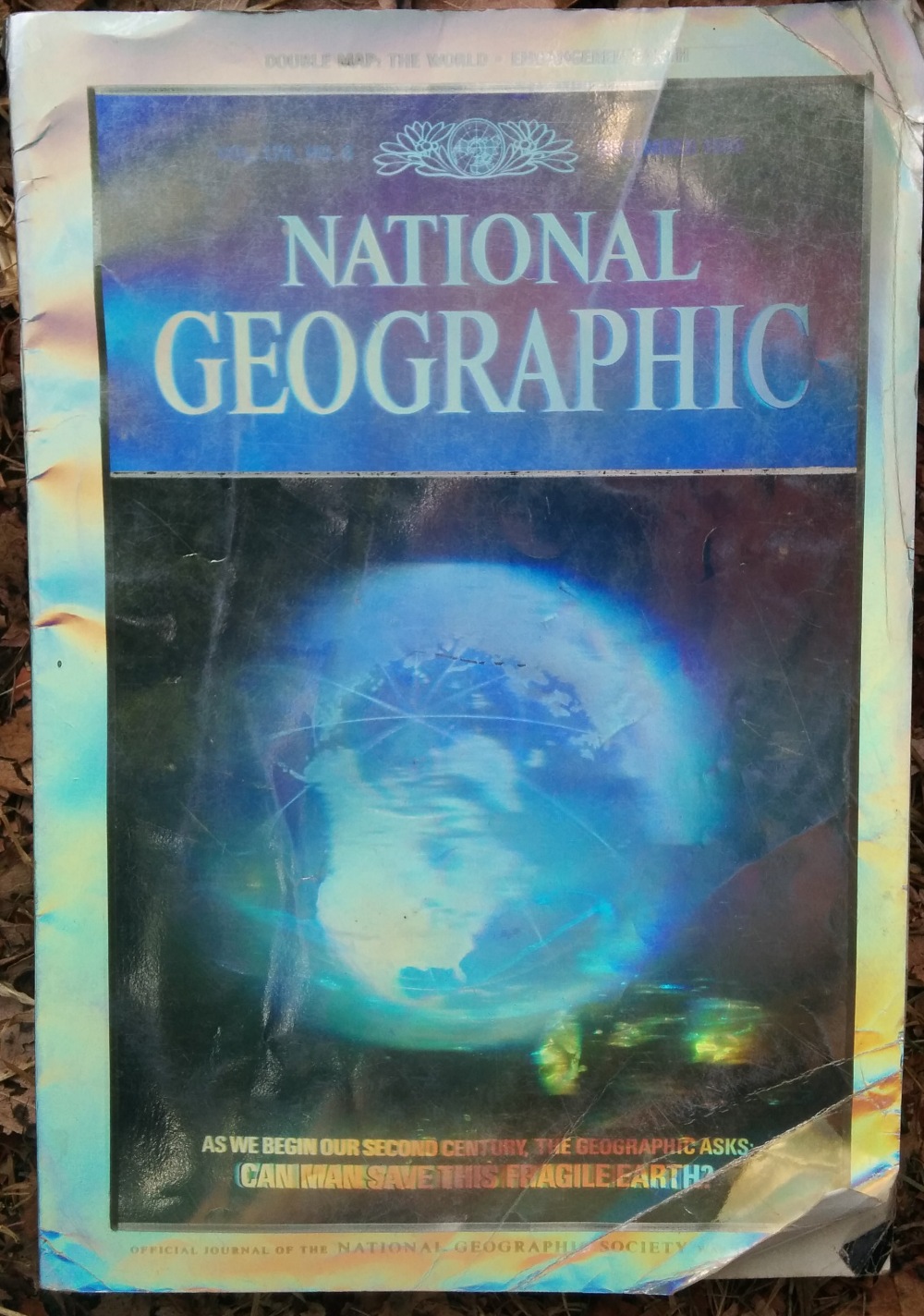 Haha but of course the back cover is a McDonalds ad featuring some faux “None of us is as good as all of us” platitudes while trying to sell as much mass-produced pseudo food as possible. Try harder everyone. 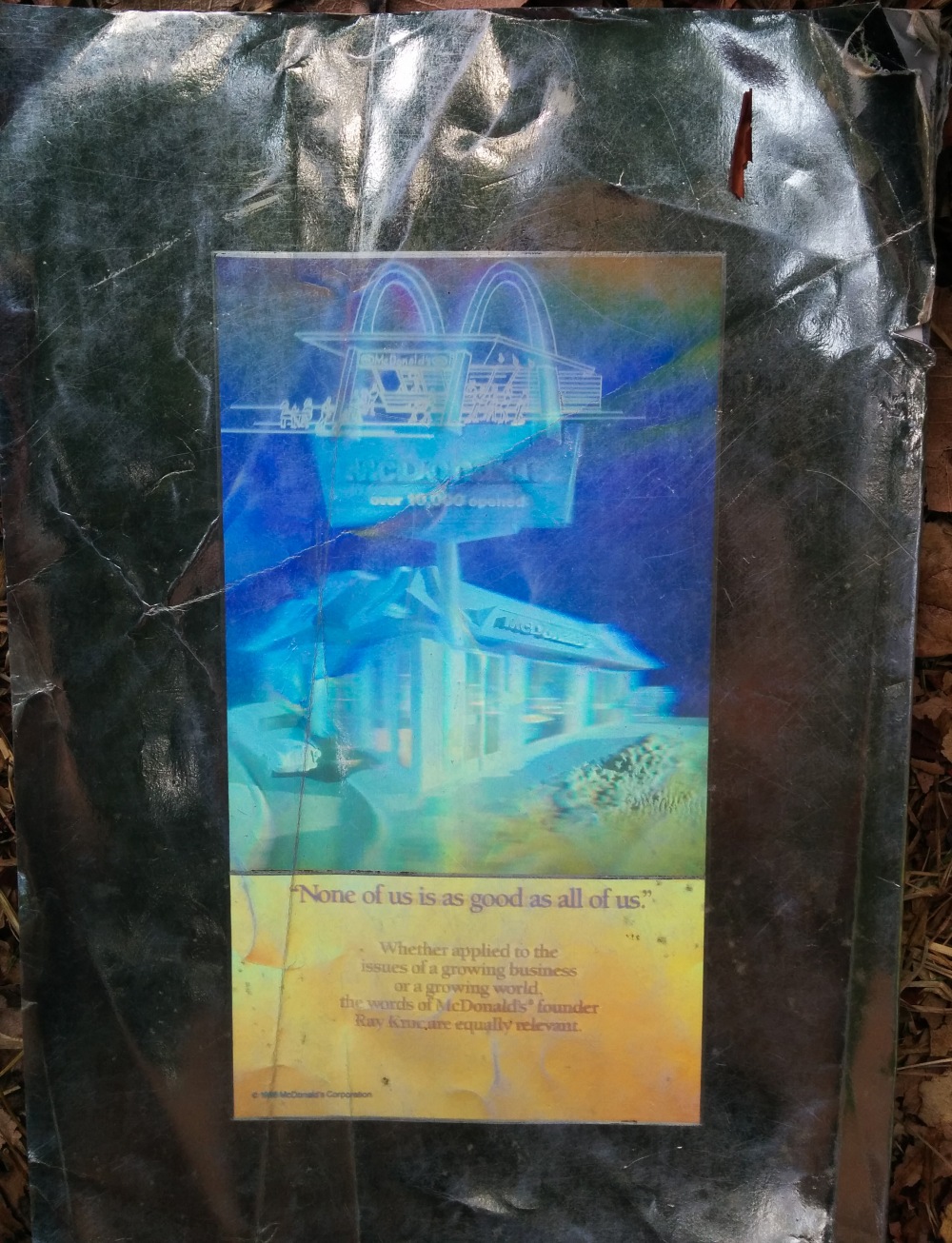 In kindergarten we all made paste-assisted paper sunhats for reasons long since forgotten in the mists of time. Mine was resting on an upper shelf in my closet and it still (almost) fit! 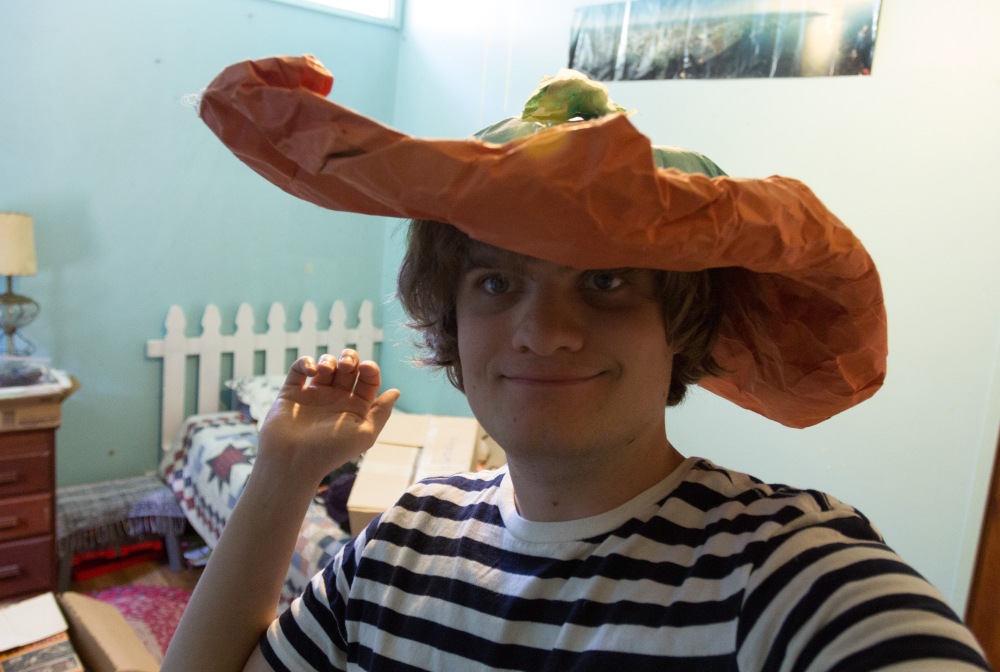 Halley’s Comet was just a few years before my time, and although the 1990s featured the outstanding appearance of Hale-Bopp, I had a lot of collected educational materials from Halley’s approach. This activity book was nothing special, but it had some outstanding 1980s graphic design of a stylized comet.

Nikky was a pretty great Recess Buddy, who worked very hard to be a safe and careful friend on the playground. Check out all of those stars! 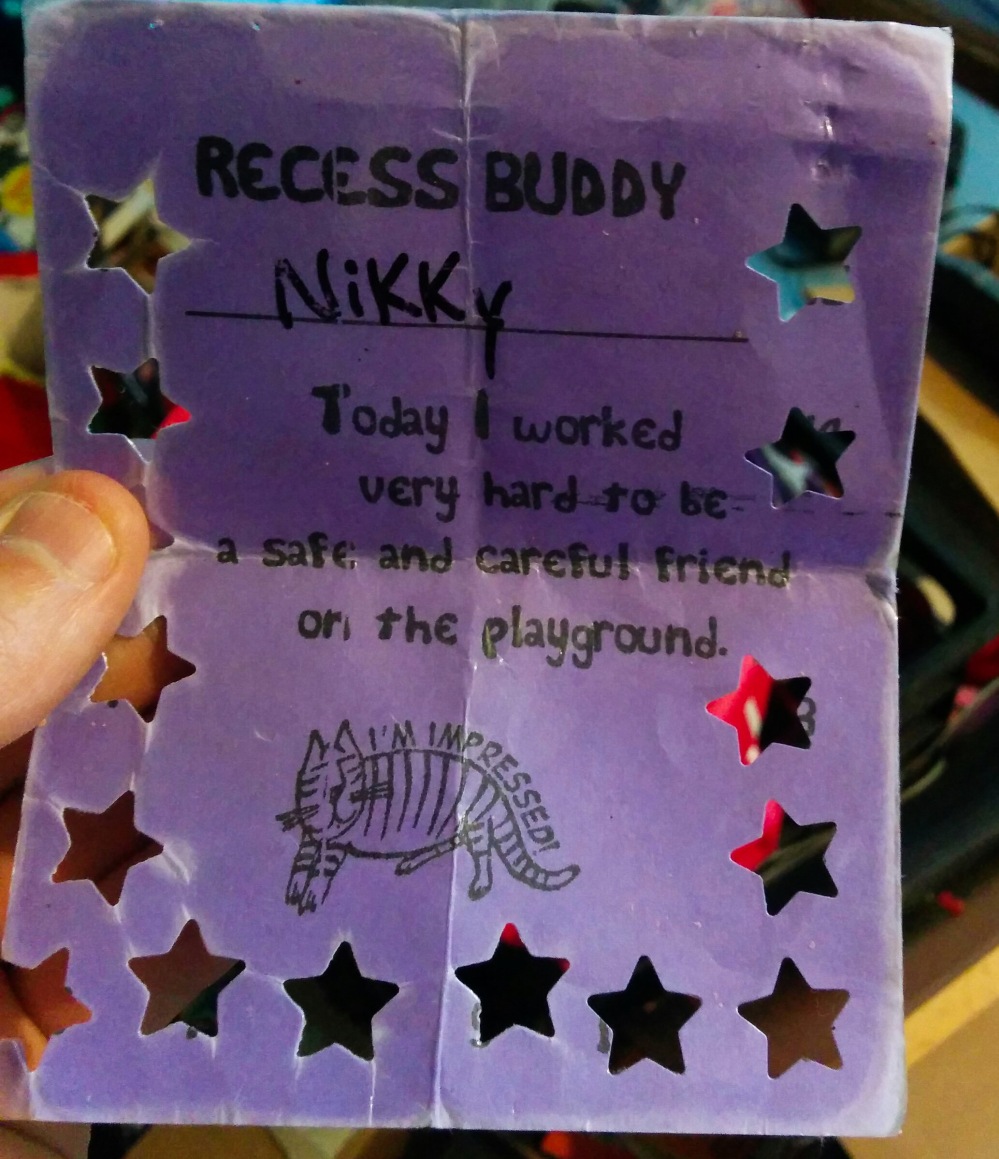 No trip to elementary school is complete without a diorama. Based on The Lion, The Witch, and the Wardrobe, mine had a lot of green arrows pointing to the seeing hole JUST IN CASE someone missed it. Not to mention the “Look in the Hole” caption in the side of the box and the not-quite-rectangle cutout in the box. Clearly this was a masterpiece of the highest order. 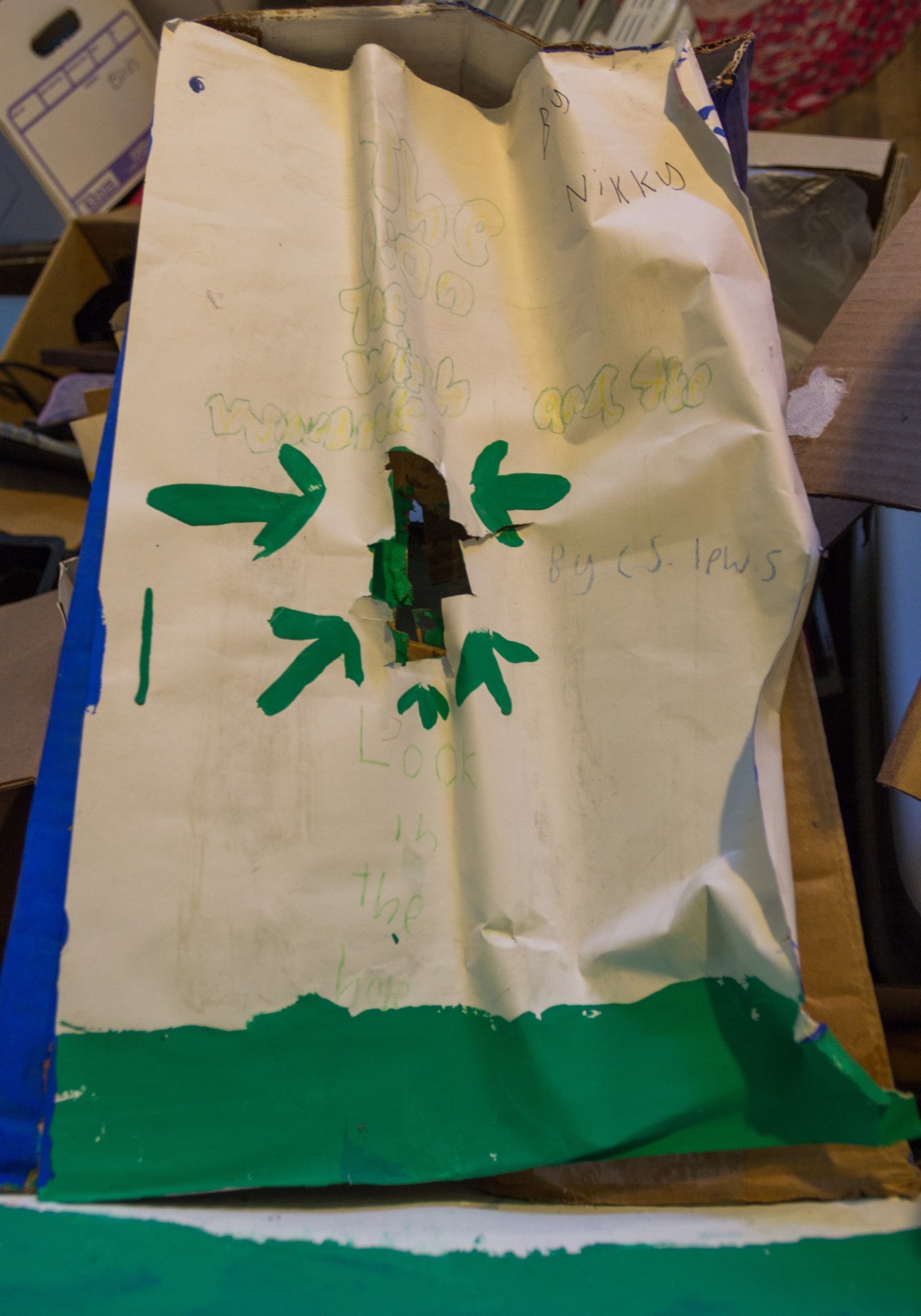 Did I even read the the book? The box is painted white with trees that are absent of snow, and the SUN IS SHINING in the arctic Narnia landscape. The trees aren’t even part of the effect! Just the lamppost is! Nikky clearly wasn’t trying very hard. 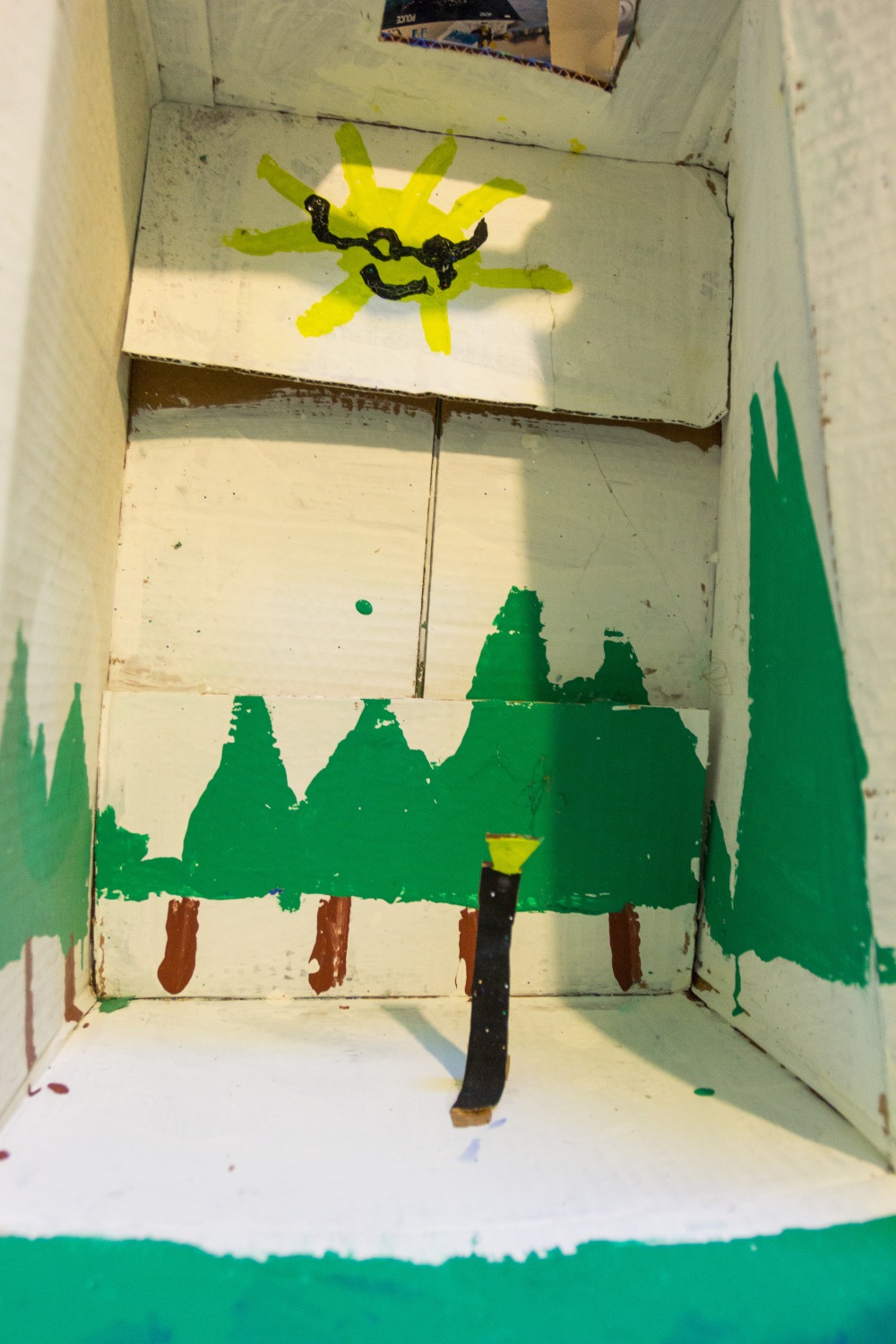 What is this? A giant sign? You’re HALF correct: notice the pink color scheme and heart above my name. It’s a Valentines Day card collector! The theory is that the larger card the better to hold all of the letters I’d be receiving. Results were inconclusive.

Throughout my childhood my sister and I received subscriptions of literary magazines appropriate for our age group from our grandmother. I’d like to think these gifts spawned a lifelong love of reading, and starting out with Ladybug, the magazines grew up with me. Spider was next, and then Cricket. Capping out the teen years was Cicada, and many of the lessons from these stories still resonate with me today.

When I wasn’t busy reading magazines, I was writing to various government entities to get free pamphlets mailed to me. These were occasionally considered fairly awesome, such as the “Atoms to Electricity” publication from November 1987 and published by the U.S. Department of Energy. I suspect by the mid-1990s they were just happy to get these 8 year old publications off of their hands, and I was happy to file them away.

For a few brief shining issues, there was a newspaper in our 3rd grade classroom. This is a work of art.

The  title of the newspaper is outstandingly long: “The Sun of Debbies Classroom.” We clearly put around 14 seconds of thought into what we’d name it before shipping it out to the public at large.

Clipart game was strong with our newspaper. With our Apple ImageWriter II printer, we were ready to spread the good word with all of the color we could muster. The future was now, and we were seizing it with all of our little hearts.

Once the reader got to the body of the paper, it read more like a letter from the editor rather than a proper article. We decided that using capital letters at the beginning of sentences was for suckers, and viewed spaces after periods with disdain. After pronouncing that we “don’t have any stories today,” a short story soon followed with the breaking news that Orcas were seen in Kitsap County.

A few students were quoted in a man-on-the-street style before the author poignantly notes that “we all would have liked to go.” 3rd graders we may have been, we still felt the twinges of inequality even at our young ages, and didn’t like what we saw.

Wrapping the issue up, we had some news that we DID INDEED have a substitute for our teacher on Tuesday. Just in case anyone needed that clearing up. 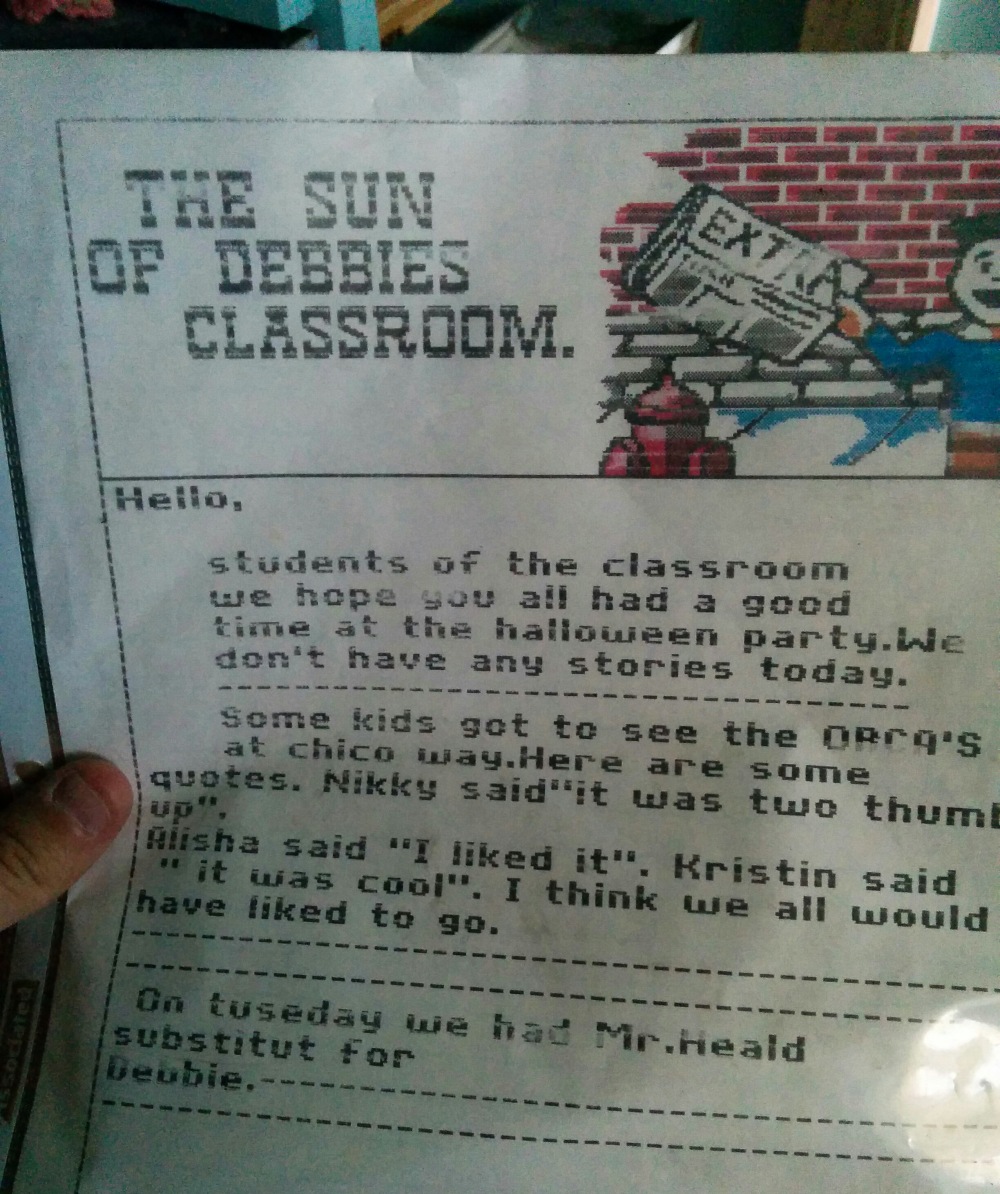 A collection of trophies slowly collects dust as they bear silence witness to my dual-sport years of elementary school. Since I largely was unable to hit baseballs with any sort of regularity, most of my athletic efforts were spent on soccer. In 1994 I managed to win “Best Defensive Player” on the team, and if my memory is correct, this was because I was the only person on the team who decided to hang back by the goal in case the other team tried to score.

Ever the sucker for unused cards, I got my hands on some delightfully 1990s-themed 60th Birthday Party cards and promptly decided that you should come to my birthday! Not only was I off by a few decades, I also decided that I couldn’t wait until my actual birthday. The place? “<intelligible>” before it ends with an ominous “COME.”

Thanks for going on this journey with me. My next scheduled blog post will be in 2024.